Nick McMurdy is a creative director at PPK, and also a screenwriter. His scripts have won or placed in over 20 international screenwriting competitions. In the past six months, he was awarded Best Short Script in the Los Angeles International Screenplay Awards with Hinesey’s Goodbye; was a Top Five Finalist in the Film Pipeline Screenplay Competition with Detached: A Thumb Wrestling Saga; and was just recently named the Grand Prize Winner of the Roadmap Writers Top Tier Competition with Starship to Nevermind. Nick likes to write alien stories featuring human characters, and he describes his writing style as Rustbelt Dramedy.

We invited Nick to share some of his favorite movies and how they influenced him.

When I was asked to put together a list of my favorite movies, my first thought was, “Shit, that’s impossible.” It’s too much pressure, and I’ll end up hating the list five minutes after making it. There are movies that entertain me, movies that challenge me, movies that inspire me, and movies that influence me. Any of them could be considered one of my favorites for completely different reasons. That’s why I decided to just make a list of movies that I happen to like for some particular reason or another, and we’ll leave it at that. Here’s my list: 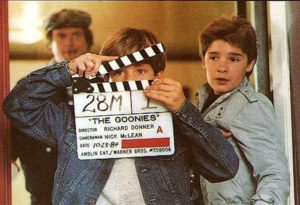 Sean Astin and Corey Feldman in The Goonies.

For the past 36 years, The Goonies has consistently made my list of favorite movies. In fact, it was my very first favorite movie. I watched it so much as a kid, I wore out the VHS tape (when those monstrosities were a thing). What makes The Goonies so good is that it’s the quintessential childhood adventure flick. A ragtag group of underdogs band together to fend off the jowly Mama Fratelli and her two villainous sons as they journey towards One-Eyed Willy’s treasure. Structurally, the film follows a formula that’s been done about a million times, but somehow The Goonies did it the best. I could wear out a few more VHS tapes before I ever get sick of it. 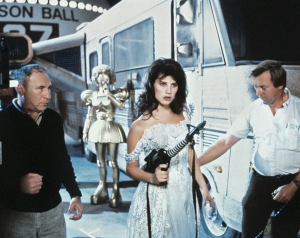 Along with The Goonies, this is another admittedly sentimental pick, as it was the second movie I ever saw on the big screen (after Harry and the Hendersons). Mel Brooks is Hollywood royalty for a reason. He’s irreverent and absurd, but he provided the blueprint for the parody genre that young comedy writers still follow. In my opinion, what makes Brooks stand out is that no one creates characters like he creates characters. In Spaceballs, the characters are truly unforgettable. Dark Helmet, Lone Starr, Barf, Pizza the Hutt… I could go on and on. As a bonus, I saw Spaceballs before I ever saw Star Wars, so I have Mel Brooks to thank for my introduction to the Lucas Universe, which I now get to share with my daughter today. May the Schwartz be with us all. 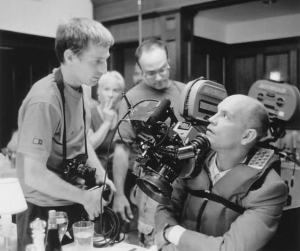 There’s quite a bit of Charlie Kaufman-influenced surrealism in my own writing, so I definitely need one of his movies on my list. Though Eternal Sunshine of the Spotless Mind might be a better film overall, my favorite work from Kaufman is Being John Malkovich. It’s a master class in understanding the rules of the world you create. Utterly bizarre in concept, yet you buy into it because the story and relationship dynamics are rooted in existential themes. At its core, it’s a film about seeing the world from someone else’s perspective, and discovering a sense of self, all through the lens of our celebrity-obsessed culture. There’s so much to relate to, you completely buy into the concept that there’s a weird tunnel in an office building that leads directly into John Malkovich’s mind. Because of course there is. This is the type of film that I’m inspired to make someday.

Christopher Nolan is my favorite filmmaker of all time, and there are about a half-dozen of his films that could make my list. I remember the first time that I saw Memento, and it blew my mind into about million different pieces. After excruciating debate, my favorite Nolan film is Inception (just edging out Interstellar). What I love most about Nolan is how much he respects his audience’s intelligence. He makes blockbuster movies with big-brained concepts, and Inception is his best example of that. It’s a reminder that not everything needs dumbed down for a mass audience to appreciate. His meticulous attention to detail really shines in this film, and he once again displays why he is a master at the craft of filmmaking. Every time I watch this movie, I notice something new that adds to my enjoyment of it.

Riz Ahmed in The Sound of Metal.

I wanted to make sure I included more recent work on this list, and The Sound of Metal is the best film I’ve seen in the last few years (although Everything Everywhere All at Once gives it a run for its money). I thought The Sound of Metal was executed to perfection. It’s intimate, gut-wrenching, and entirely experiential. You actually feel what it’s like to lose your hearing, your career, and your sense of self. The sound design is next level, and it isn’t afraid to be another character in the world. There are moments of claustrophobic cinematography to amplify the confusion and fear, while the visceral nature of Riz Ahmed’s performance keeps you engaged throughout. I love this movie, and I still cry at the end every time I watch it.

OK, that’s it. Those are some of the movies I like. Some of them I like purely for nostalgic reasons. Some I like for their sheer originality. Others I like for their craft. Now, if you’ll excuse me, I need to get back to writing. I’m trying to create something that will end up on someone else’s list someday.